Ben Boulware burst onto the scene this year as a critical part of Clemson’s national championship bound defense, making plays week-in and week-out from his linebacker spot. Last year he made two starts and made the most of those opportunities, but this year he took over the full time role and vaulted Clemson to the title game grabbing Orange Bowl Co-MVP and All-ACC team honors along the way.

From mustaches to Twitter comebacks, on and off the field Boulware was one of my favorite players of the 2015 season. In Sideline Warning’s first player interview, the junior out of TL Hanna High School (the same high school of James “Radio”Kennedy) took the time to answer some questions for us about this season, growing up near Clemson, and what to look for next year.

You grew up in Anderson, SC, just minutes from Clemson. Was there ever any doubt you were going to be a Tiger?

“Yeah absolutely. I knew my whole life that I wanted to attend Clemson but I had to wait on them to pull the trigger. So from my freshman to junior year of high school is when I started to get scholarships from schools and that’s when that doubt creeped in. Clemson was the last school to offer me a scholarship so in that waiting period, I definitely explored other options because I didn’t believe that Clemson would offer.”

Be honest, how many times did you dream of playing for a National Championship wearing orange and purple? And what was living out that dream like?

“The dream for me growing up was more to just play for Clemson. Playing in a National Championship really never crossed my mind because Clemson hasn’t been on that stage in 34 years so to actually get that opportunity was surreal because there’s only been one other team from Clemson that has played in that game.”

You guys had a heck of a run. What was your favorite part of the season this year, both from a team perspective and a personal perspective?

“My favorite points in the season were probably beating Notre Dame and Oklahoma because those were the two games where we were doubted the most and to completely dominate both of those team in every facet was an awesome feeling. My favorite moment this year was probably stopping Notre Dame’s quarterback on the two-point conversion because it was such an awesome and emotional game and to win the game in such a cool fashion was a great feeling.”

At what point in the year did this team start to feel special?  Obviously a lot of teams come into the season with the same goal, but is there a turning point when you feel like something is different this year and this is a team that really will go all the way?

“For us it came really early in the season when we beat Notre Dame. I think we were doubted more in that game than any other game in the regular season and to completely dominate them gave us the confidence that we could beat any team in the country.” 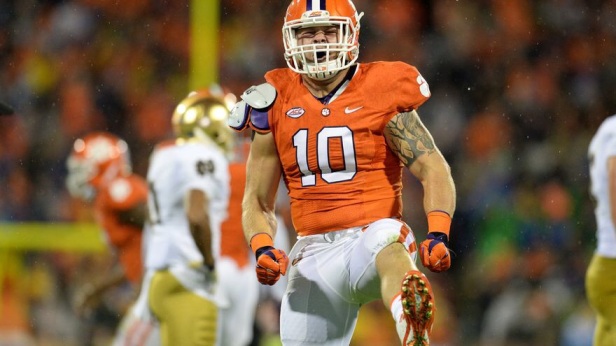 I hear you were pretty good on the baseball diamond in high school, and your brother Garrett currently plays in the Reds organization. How did baseball compare to football for you? And who was your favorite baseball player growing up?

“I grew up playing both sports and loved each of them the same. And all throughout high school I figured I was just going to play both at Clemson. But once I got to Clemson and realized how much of a time commitment it is just for football, I realized that I would have to give up baseball because I didn’t have time to do both. I would probably say Chipper Jones just because he was the man. He looked like a regular dude but once you saw him on the diamond you could tell he was special. And he also always played with a fat dip in so that was pretty awesome.”

It has to be fun to prove Twitter trolls wrong, whether it’s someone saying you’ll never start or just opposing fans. Once again Clemson dominated Oklahoma, and again you were a huge part of that.  You laid the law down on Twitter before the start of the season with some Oklahoma fans. How did it feel on the podium as the defensive player of the game in the Orange Bowl?

“Man it was awesome feeling to be on that stage with Coach Swinney and Deshaun. Just to see all your hard work pay off and get recognized for it on the biggest stage is a really cool feeling. No one outside of our team thought we were going to win that game and to shut people up once again really made me feel all warm and cuddly inside haha. Just because every single college football analyst picked us to lose, and not even lose but get dominated on both sides of the ball. And we made them look pretty stupid.”

With 10:34 left in the fourth quarter of the championship game, Alabama ran and perfectly executed an onside kick.  At that point, the game is tied and it really feels like Alabama is struggling to slow down your offense.  I know it’s tough, but walk me through your what you were feeling during and right after that play.

“That was the play that really scared me because I knew how big of a momentum boost it was for their team and I knew how much they were going to rally around that play. So it made a lot more difficult on us as a team because it took a lot of energy out of us and did the complete opposite for them.”

What goes through your mind when facing off against a player like Derrick Henry coming off a Heisman win? Is he just another opponent to overcome, or is there some extra motivation?

“Its not that it gives any of us any extra motivation to play any harder or to prepare that much more because were facing the Heisman winner. I just knew how big of an opportunity it was for our defense that if we shut down the Heisman winner then that would then put the spotlight on our defense. And we prepared for him and the rest of their offense the same we did for the other 14 opponents we faced that year. We had a formula of preparation that we did each week and it wasn’t going to change based off of the opponent we played. I said it all year and I’ll say it again, the same way we prepared for Wofford is the same way we prepared for Alabama. We don’t change how we prepare for anyone. We don’t care who is lined up in front of us, we know that if we prepared the right way and play to the standard Clemson has set, then there’s not one team in this country that can beat us. We respect everyone we play, but we fear no one.”

Piggybacking off of that, who was the best player you faced off against this year? Skill, O-line, anything.

“Each team we played featured a couple special players that I could mention but the two that I remember the most is Jacoby Brissett and Dalvin Cook. Brissett because he was so athletic and quick on his feet for being as big as he is. Me and BJ probably should have had 2 or 3 more sacks each that game if he didn’t break our tackles. And Dalvin Cook because everyone knows how good he is. Led our league in rushing this year and is just a special talent.” 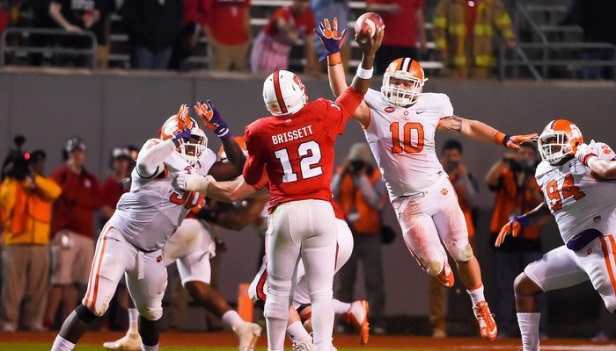 In interviews Dabo seems to especially enjoy his victories and show less restraint than other coaches. Does he carry that mentality throughout the season? How does it affect you and your teammates?

“Absolutely. He is the same person he is to the media as he is to our team and that’s what makes him so special as a coach. He doesn’t put on a front for anyone. He is who he is and that’s what made him so successful as a coach. He cares more about us off the field as men more than he does about our performance on the field. His main goal for his players is to come to Clemson and get a degree and that for itself speaks volumes about his character.”

Besides Death Valley, what’s the best atmosphere you’ve played in? Most challenging?

“The best atmosphere I’ve played in outside of Clemson would probably have to be at Florida State. Regardless of who they play they’re going to have a packed house and that’s how it was when we played them last year. That stadium was rockin’ from the first play to the very last.”

Clemson had a fantastic season by any measure.  How do you go about maintaining that level of success and pushing over the final hump? What message do you have for college football in the 2016 season?

“I think it would have been more difficult for the 2016 team to match last years success if we would have won the National Championship because that is the ultimate goal each year to win it all. But we didn’t. We lost the game. We got pretty close but we still lost. And that by it self should be the motivation for the 2016 team; to finish. And a lot of the guys on our team know how much work and dedication it takes to get to the national championship and that will help our team out for 2016 but we got to give a little extra. We gotta spend 30 more minutes in the film room. We gotta do that last rep in the weight room. Because that’s the difference between being a National Champion and being #2.”