With Manning and Newton facing off on Sunday, Super Bowl 50 marks the first time two #1 overall pick quarterbacks have faced off in the big game. This sparked a question that I asked the guys, and it got me rolling so I figured I would write about it here. Who is the greatest #1 overall pick in each of the four major sports?

There have to be some rules for me to accomplish this, mainly because I’m too young to cover all the greats. So with that, I set the starting range cutoff at 1970. This cuts out ’69 and the likes of OJ Simpson and some guy named Lew Alcindor. By the four major sports I of course mean the NFL, MLB, NBA, and NHL. I am only taking into consideration what has been accomplished to date, so a lot of stars in the making such as Cam and Bryce Harper can’t truly be included based on their potential to be greatest picks ever.

Teams have months, entire offseasons, to decide who to select first overall. They are “on the clock” the moment the season ends (with the exception of the NBA and the NHL lotteries) and more times than not, the pick still doesn’t end up having the best career in that draft. Each sport had viable candidates, and I had to pick a few honorable mentions considering how difficult it was to decide.

It was pretty easy to narrow this down to three players, and honestly this was the easiest sport to crown the best #1 pick. The short list includes Ken Griffey Jr. (1987, Seattle Mariners); Chipper Jones (1990, Atlanta Braves), and Alex Rodriguez (Seattle Mariners, 1993). The reason that it was so easy to narrow down a short list from the MLB simply because baseball is the only major sport that a #1 overall pick might never appear in a game. Unlike the short lists of other sports, there are only two championships between the players. Jones and the Braves in 1995 and Rodriguez and the Yankees in 2009. Jones should have had more considering Atlanta’s run in the 90s, while A-Rod got to New York a little bit late and Junior only got to play in a mere 18 postseason games.

Junior was just voted into the Hall of Fame this year, and Jones will be a first ballot Hall of Famer. But A-Rod is the greatest #1 overall draft pick in MLB history considering both statistics and accolades. Ken Griffey Jr. amassed a career WAR (wins above replacement) of 83.6, and Jones 85.0. Incredible numbers, however Rodriguez is a level above: 118.8, which is 12th all time and growing. A-Rod was (and almost still is) the ultimate 5 tool player. We seem to forget that he was one of the best defensive shortstops in baseball before he came to New York and moved to the corner for Derek Jeter. The steroid and biogenesis cloud will always linger over his head, and it might even go as far as hurting him when it comes to getting to Cooperstown – but there is no denying that A-Rod has had the greatest career of MLB #1 picks.

For my NHL best #1, I needed a bit of help so I outsourced to my NHL guy Michael Ruffcorn (@like_it_ruff).

Kane, Stamkos, Tavares, Ovechkin, Crosby; the list goes on. Over the past 10 years, hockey fans have been treated to an outburst of talent from the NHL’s #1 overall pick, which has helped hockey not only to survive, but to thrive. I pity the aspiring sports journalist that has to write this piece in 10 years. Luckily for me, it is still too early in any of their careers for them to legitimately be considered.

My competition for the number one number one boils down to Denis Potvin, Guy Lafleur, and Mario Lemieux. The 310 goals and 742 assists Potvin accumulated over his career easily slot him as one of the best defensemen to ever play and he amassed an incredible +460 (+/-) during his time in the league, a true testament to his dominant 2-way hockey. However, it wasn’t Potvin’s ridiculous stat line that landed him in my top 3, but his time spent wearing the “C”. He captained the Islanders to four consecutive Stanley Cup wins and goes down as the second greatest captain of all time- behind Messier of course. It’s no wonder you can still find Rangers fans chanting, “Potvin Sucks!” in the Garden, some 30 years later. (See below)

Google a video of Guy Lafluer and you’ll be impressed. Then remember he was doing that in 1970 and you’ll be more impressed. Tack on 5 Stanley Cups, 2 Hart Memorial Trophies (MVP), 3 Art Ross Trophies (Scoring Champion), 3 Lester B. Pearson Awards (Players MVP), and a Con Smythe (Playoff MVP) and you can see why The Flower made the list. His style of play was mesmerizing and it was undoubtedly Lafluer who Gordon Bombay was thinking of when he famously uttered “soft hands, like an egg.” Unfortunately (air quotes) for Lafluer, he played on the greatest NHL team of all time and had plenty of help from the likes of Steve Shutt and Jacques Lemaire, which may have inflated Lafluers stat line. It is for this reason that he claims the first runner up.

Mario Lemieux was a freak. I’ll try to paint a picture. Lebron James stands at 6’ 8”, and weighs 250 lbs. Mario Lemieux stood 6’ 6”, weighed 250 lbs, and could dance like a ballerina on figure skates. Like I said, Lemieux was a freak. The two time Stanley Cup champion, and 2002 Olympic gold medalist had one of the most impressive careers, given his circumstances, of all time. He ranks second all time in points per game with 1.88 behind Gretzky’s 1.92. He ranks second all time in goals per game with .754 behind Bossy’s .762. On top of that, he collected 3 Hart Memorial Trophies, 6 Art Ross Trophies, 4 Lester B. Pearson Awards, and 2 Con Smythe Trophies. Despite all of the accolades and the Gretzky-esque stats, it was Lemieux’s will to play the game that won him the top spot. Lemieux fought several chronic injuries during his career along with being diagnosed with Hodkin’s Lymphoma. He missed a total of 4 seasons due to illness and had two more seasons severely cut short. Most notably, Lemieux was forced to miss the entire 1994-1995 season in the heart of his prime. However, to no one’s surprise, he came back the next year and won the Art Ross. They say that no one will ever come close to breaking The Great One’s many scoring records, but if anyone had a shot, it was a healthy Mario Lemieux. 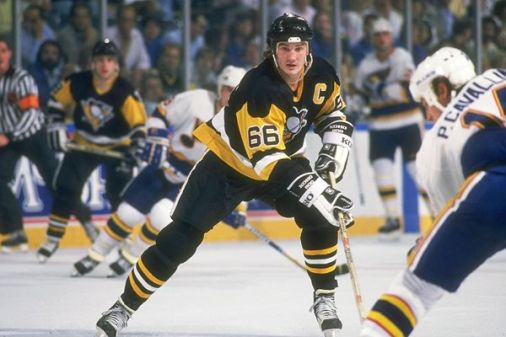 The NBA was the most difficult to crown as the best #1 ever. I had plenty of debates with the guys on this one. I narrowed it down to Lebron James (2003, Cleveland Cavaliers); Tim Duncan (1997, San Antonio Spurs); Shaquille O’Neal (1992, Orlando Magic); and Magic Johnson (1979, Los Angeles Lakers). I’ll cut the crap and jump to it: LeBron vs. Magic is the only real debate. Shaq and Duncan are obviously great. Both were/are just true winners and dominators. However, LeBron and Magic are just a tier ahead.  Duncan loses out because of a combination of the system he played in, a slightly less dominant peak, and the advantages that come with having Greg Popovich as your head coach for your entire career.   Shaq was one of the most dominating players in NBA history at his peak, but he didn’t sustain that level of play for long enough to beat out Lebron or Magic.

LeBron and Magic are both incredible talents, so to settle this argument we have to look at the resumes. Right now, Magic wins that matchup. Let me be clear: I have no doubt that LeBron will be atop this list by the time his playing days are over. Heck, if he can pull just one championship out for Cleveland, or even just get back to the finals a couple more times the crown will belong to King James. That being said, for now Magic Johnson is the greatest #1 pick in the NBA.  The 6’8″ point guard compiled over 10,000 assists and 17,000 points on his way to claiming 3 MVP’s, 3 Finals MVP’s, 5 NBA Championships and his spot as the greatest point guard in the history of the NBA.  Lebron James is a fantastic player and should equal those accomplishments eventually, but he’s not there yet.

Peyton Manning vs John Elway… Vs Bruce Smith. The NFL debate comes down to what you value greater when it comes to position and impact offensively or defensively. Peyton Manning and John Elway dominated the game from obviously the most prominent position, whereas Bruce Smith is possibly the greatest pass rusher of all time.

Elway didn’t find Super Bowl success until his final two seasons, and he of course rode off into the sunset with his second super bowl trophy in his final season, something Manning looks to do on Sunday. Smith was a humongous part of that early 90s Bills team that won the AFC four consecutive years but unfortunately came up short in all four of those Super Bowls. That dooesn’t matter, Smith is still a winner; reaching four in a row is remarkable in itself (if you haven’t yet, you’ve got to sit down and watch the 30 for 30: Four Falls of Buffalo). Bruce Smith obviously wins the defensive argument for greatest #1, but the Elway to Manning comparison is a bit tougher. For about 15 seconds. The stat line doesn’t lie. Manning has thrown nearly twice as many touchdowns and only 25 more interceptions while revolutionizing the quarterback position. It seems like Manning will likely come up short on the Brady-Manning debate, but Manning is clearly the greatest #1 overall quarterback selected. Until 2011 at least, but that’s a different story still being written.

The most sacks (200) in NFL history vs the most TD passes (539 thus far) in NFL history. Four Super Bowl appearances and 11 pro bowls vs four super bowl appearances and 14 pro bowls. I could go on and on, but I have to go with the player who has hands down changed the game of football as we know it today. Manning has spent his career analyzing, studying, and preparing like no quarterback before him and has proceeded to pick apart defenses in ways the league hadn’t seen before.