Now that the NBA season is more than halfway over and the All-Star break is rapidly approaching, it’s time to check in on the status of NBA Award races.  This is not a prediction of who will win the award at the end of the season (although some of the players here might) but rather a selection of who should win the award if the season were to end today.  The MVP spot was a bit obvious, but other awards were much tougher to pick this year.  Let us know what you think in the comments below.

Steph is the clear choice for first half MVP, and he will end up winning his second consecutive award at the end of the season barring a catastrophic collapse. His 32.07 PER leads the league by a mile – Russell Westbrook is second with a 28.69 – and would top Wilt’s 31.82 as the best mark of all time if the season ended today. He has 240 3-pointers made this year, on pace to shatter the record of 286 set by, of course, himself. Still, counting stats don’t do justice to Steph’s effect on the court. He treats defenses like a Stretch Armstrong toy. You have to guard him five feet outside of the three-point line and most teams choose to double him off of a pick-and-roll. The combination of his lightning-quick release, accuracy, expert passing, and ridiculous handles makes him perhaps the greatest offensive weapon the NBA has ever seen. Steph is an average defender whose flaws are covered well by a great system in Golden State, but when you’re as good as he is offensively, average defense nets you as a major plus. 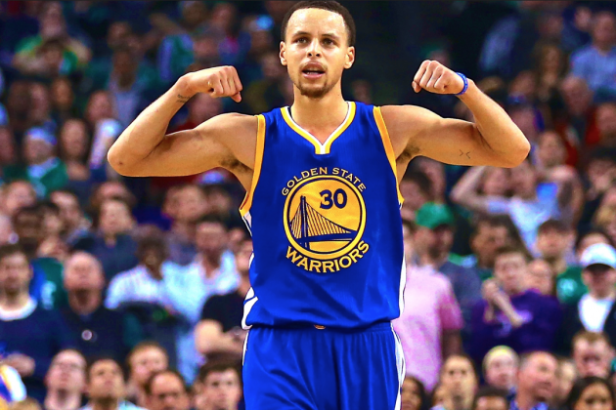 Besides being the best defensive player in the league, which I will discuss in a minute, Kawhi has turned into the strongest offensive weapon on the Spurs.  Leonard is 8th in the league in True Shooting Percentage (an advanced statistic that combines FG%, 3P% and FT% to better evaluate a player’s shooting efficiency) and is third in the league in 3-point percentage.  He has become the go-to player in the Spurs offense when they need a basket and other teams have struggled to stop him.

The first two spots were easy, but this one was tough. I went back and forth here between Durant, Lebron James, and Russell Westbrook.  You could make a good argument for all three.  At the end of the day, though, Durant has a PER slightly higher than Lebron and slightly lower than Westbrook with a much lower usage rate.  Durant’s True Shooting Percentage  is .636 so far this year, second in the league to Curry.  There’s also a chance he hits the 50-40-90 mark (FG%/3P%/FT%) this year, which is absolutely incredible for someone who takes as many shots as he does.  If that happens, Durant would join Larry Bird and Steve Nash as the only players in NBA history to have multiple 50-40-90 seasons.

Defensive Player of the Year

As I said in my All-Star ballot column (which can be found here), last year Kawhi became the first perimeter defender to win the DPOY award since Ron Artest in 2003-04 and Gary Payton in 1995-96.  Leonard guards the best perimeter player on every team and, Curry withstanding, has routinely shut them down.  He is big enough to bang with 4s, quick enough to stay with small guards, and slides over pick and rolls with ease.   Kawhi is a complete defensive stopper.

Draymond Green is listed at 6’7”. Draymond Green has graded out as the best post defender in the NBA this year. Somehow we live in a world where both of these seemingly disparate statements are true. Curry may be the most important cog in the Warriors machine, but Green is a very close second. He can switch onto all five positions on defense and plays elite defense on three. He rebounds well, passes well, and does all of the little things for the Warriors.

Rookie of the Year

Third in the NBA in rebounds, eighth in blocks, and 15th in PER, Towns has had himself a monster rookie year.  Like all rookies, it will take some time before he fully understands spacing and defense at the NBA level, but he appears to be a fast learner.  In an interview last month Timberwolves’ coach Sam Mitchell called KAT the best shooter on the team.  This is a 7-foot 20 year-old, and he’s the best shooter on an NBA team?  Towns has a bright future in the league.

Kristaps grabs the second spot over Jahlil Okafor in part because of the intangible benefits he has brought to the team this year. Carmelo is enjoying basketball again, other Knicks look like actual NBA players, and a New York basketball team is semi-relevant again.  Apparently all New York needed was a 7’3″ Latvian with an affinity for hip-hop culture.  Kristaps is fifth in the league in blocks and is averaging close to 18 points per 36 minutes. Durant described him earlier in the year as a “unicorn” and that’s the most accurate way to describe him,because this kid shouldn’t exist. 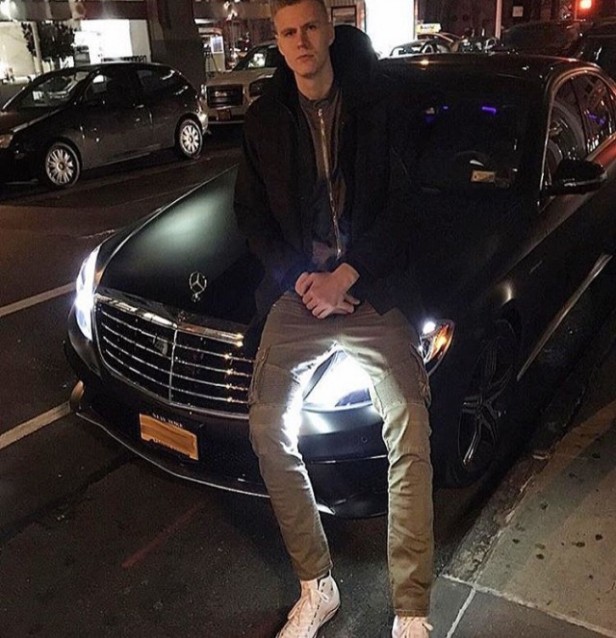 Sixth Man of the Year

This could be a little biased. Iggy has been one of my favorite players in the league since his final years with Philadelphia. For someone who was once pegged as a no-skill high flyer, Iguodala has had a remarkably successful career. He transformed himself for his last few Sixers teams and an exciting Denver team from a high-scoring highlight reel with a broken jump shot to a perimeter destroyer on defense and an elite cutter with springs on offense. Iggy’s shot from deep has always been a relative weakness, but he is up to 39.4% on three-pointers this year. That’s not Splash Brother level, but it is still a very good percentage in the NBA (league average so far this year is 35.2%). Iguodala has served as a key piece on what is clearly the best team in the league. So far he deserves to be Sixth Man of the Year.

Runner up: Will Barton

Barton has flourished this year in the sixth man role for the Denver Nuggets. He’s averaging 19.4 points, 7.6 rebounds, and 3 steals per 36 minutes while playing solid defense.  He has been one of the bright spots on a young Denver team that will look to improve under the guidance of Emmanuel Mudiay.  He also fist-bumped a baby.

This one is really tough. It always depends on your individual definition of most improved and your preference of starters turning into stars, stars turning into superstars, or fringe players becoming important contributors to an NBA team.  Andre Drummond this year transitioned from a giant human pogo stick with no real understanding of the NBA game to, well, a giant human pogo stick with some understanding of the NBA game.  When you have Drummond’s athletic abilities, though, that change means a lot.  Reggie Jackson-Drummond pick and rolls are tearing up the league this year due in part to Drummond’s better understanding of offensive spacing.  He has added a solid drop step and a righty hook that have become decent weapons in the post.  Oh, and he’s leading the league in rebounding by close to a hundred boards.

A few years ago ESPN ranked Bazemore 499th out of 500 players in its NBA Rank. Since there is only room for about 450 players on NBA rosters, it was a bit of an insult. Essentially, they were saying he didn’t belong in the Association at all. Fast forward to today and you can see Kent making highlight reels almost every night – and not just with the bench celebrations that made him famous.  Now you watch Bazemore and wonder how this guy was ever the 14th man on an NBA team.  A freak athlete, Baze contributes borderline elite perimeter defense to the Hawks while knocking down a solid 39.6 percent of his 3-point shots.  Bazemore was a bench player for the Hawks until the playoffs last year, but this year he has made the loss of Demarre Carroll a lot easier to handle.

Comeback Player of the Year

I’m not even going to throw in a runner up for this award because that would feel like an insult to PG-13. After his gruesome injury during a Team USA scrimmage, George put in the work to rehabilitate his leg and managed to return and play as well or better than he played before the injury. I mean, I’m of the opinion that Shaun Livingston should have won the award every year he stepped on a basketball court after his knee exploded, and George’s injury looked almost as bad as Livingston’s. George will win Comeback Player of the Year, and I’m glad for him, but I’m mainly thankful to have All-Star Paul George back in our lives. 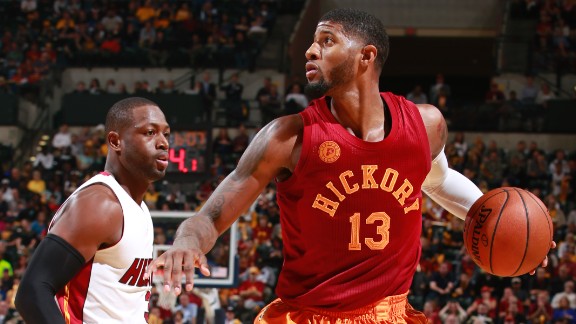 Coach of the Year

Obviously, Walton is ineligible for coach of the year and wouldn’t win the award anyway since Steve Kerr is back for the second half of the season. Still, he coached a team that went 39-4 during his tenure. That has to mean something. Even if none of those wins will count towards his record, they count here.  The Knicks and Nets will probably throw heaps of money at Coach Walton, but it’s hard for me to see him coaching in a state without certain legalized medical products.

In my mind Pop should win this award every year until he retires, and maybe a few years after that. He is just head and shoulders above everybody else in the league. When he retires we will have months of Popovich-Auerbach-Jackson debates on ESPN, and he has deserved every bit that will come. That doesn’t mean he has to enjoy it, though.