When the Braves fired Fredi Gonzalez yesterday, the timing was weird. He is hardly responsible for the Braves’ historical struggles so far this season given the drastic rebuild that left him with a bad roster. No manager, from John McGraw to Joe Torre could succeed in this situation. That’s the basic premise of most takes on the firing from fans and media, and it’s true. But claiming Fredi was wronged and criticizing the move because of that reasoning is misguided.

Yes, the timing was weird. However, Fredi Gonzalez was not fired because of the Braves’ record in 2016. He is not some scapegoat for a broken down franchise looking for answers, because that’s not what the Braves are. There’s a clear plan in action, and Fredi was never part of the plan. His fate was sealed from 2011 to 2014 when his good Braves teams suffered inexcusable late season collapses and playoff failures.

In his first season as Braves manager, Gonzalez oversaw an epic late season collapse. The 2011 Braves were 80-55 going into the final month of the season with an 8.5 game Wild Card lead, but went just 9-18 in September and missed the playoffs.

Gonzalez led a very good Braves team in 2012 that won 94 games, but failed to advance out of the Wild Card round.

He managed an even better 2013 Braves team that won 96 games and a division title, but failed to get out of the Divisional round. That 3-1 series loss to the Dodgers produced the single lasting image of the Fredi Gonzalez’s tenure – Craig Kimbrel standing in the bullpen with arms crossed as Juan Uribe hit the go-ahead home run in game four for the Dodgers. 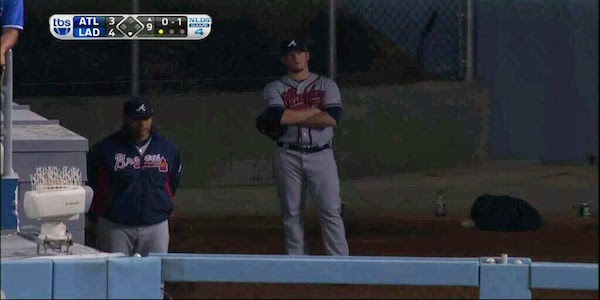 Not using the best closer in baseball with a one run lead late in an elimination game was Fredi’s greatest individual failure, and also represents a consistent pattern of bullpen mismanagement.

The following season, Gonzalez’s Braves were ten games over .500 as late as July 28th before a 21-35 finish.

Over Gonzalez’s first four seasons, his teams had excellent talent including the likes of Chipper Jones, Tim Hudson, Brian McCann, Jason Hayward, Freddie Freeman, Andrelton Simmons, and Justin Upton. But his teams consistently faltered late in the season and produced just a 1-4 record in the playoffs. His 2015 and 2016 teams had significantly less talent, and the results have reflected that. However, Fredi’s incompetent lineup and bullpen management that held the Braves back in previous years remained. Up until his final games he maintained his affinity for batting his worst hitters towards the top of the lineup, be it Melvin Upton three years ago or Erick Aybar three days ago. No matter what the talent level of the team, that’s a practice that warrants job loss.

When the new front office took over after the 2014 season and started the rebuild, they did Fredi a favor by giving him a tryout for the future. But after a season and a quarter of the same incompetence, it was clear he was not right to lead the team into its bright future.

Worse, Gonzalez failed to do what was best for that future. He was reluctant to give young players like Mallex Smith the innings he needs to learn and improve. When the lack of concern for the future became evident, it was time for the Braves to move on. As for the timing, perhaps the front office felt that getting the right man for the future would be easier when moving into a new stadium with significantly better talent in 2017 than before the already-lost 2016 season.