You know what’s cool?  Jumping over people.  It was cool when Vince Carter jumped over that 7’2″ French dude in the Olympics.  It was cool when  Neo jumped over Morpheus in the Matrix (even if he got knocked down right after).  And it’s definitely cool every time someone jumps over another guy in football.  Listen, I’m not saying that Knowshon was the first person to leap over a defensive player in football, I’m just saying there was a definite uptick in hurdle attempts after Moreno cleared a defender for Central Michigan in 2008.  Also, yeah, Knowshon was a fantastic player who was a blast to watch day in and day out.  But mostly the part where he jumped over a dude.

If you want, you can just skip the paragraph and watch the highlight tape. That’s all the explanation I need.

See? However painful and cringeworthy Johnny’s post-college downfall has been, his college career was that much fun. Every time he touched the ball he created the potential for some ridiculous, incredible play you had never seen before. He turned sure-sacks into to touchdowns like no player before or since. His ability to escape pressure broke football like pre-Finals Steph Curry broke basketball and baffled the un-bafflable defensive minds of Nick Saban and Kirby Smart. I’ve never cared for Manziel’s personality, but on the field he was just so damn fun. 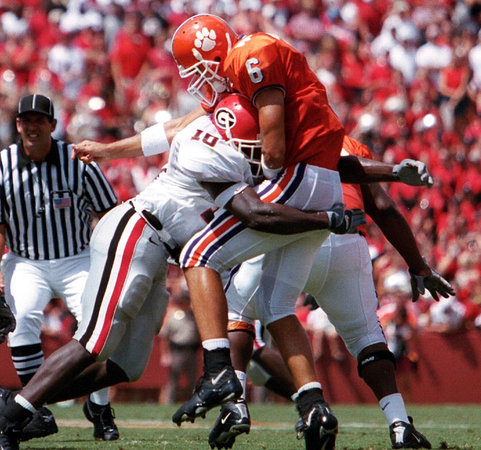 These days Thomas Davis is known for being NFL Man of the Year and playing in the Super Bowl with a broken arm, but once upon a time he roamed the Georgia secondary as a head hunting safety. Then he got a little bit bigger and started dominating from his linebacker spot. During my personal favorite era of Georgia football, Davis was the playmaker right at the heart of it. His two forced fumbles against LSU in the 2004 game in Athens (one on a crushing hit on then freshman Jacob Hester, one reason why I had to list Davis higher) led the Dawgs to a 45-16 victory that day. Davis has been an absolute warrior in the NFL too, fighting through multiple knee surgeries and the aforementioned broken arm.

PS, I couldn’t mention Davis without mentioning his comrade Odell Thurman. Thurman made Davis that much more fun to watch (“Oh Hell its Odell”)

In 2005, most Mizzou fans probably thought they had seen the best quarterback that would ever play for Mizzou in Brad Smith. Smith’s successor has that title now, and that man is Chase Daniel. For what Daniel lacks in stature (Google gives him a generous 6 feet), he makes up for with his arm. Daniel guided Mizzou through their best years in school history, which included a week as the #1 team in the country in 2007. He finished fourth in the Heisman that season as the Tigers went 12-2, only losing to the Sam Bradford led-Oklahoma Sooners who played in the National Championship. Daniel took a program that hadn’t had incredible success in their history and started them down a path of consistent winning, which in-part likely helped their cause for joining the SEC. My favorite memory of him as a Tiger was when he led the #4 ranked Tigers to a win over #2 ranked kansas, giving them the #1 spot in the country. Mizzou fans cherish Daniel and drink to forget that Gabbert played there as well.